July 4th is not a Panamanian holiday!  But it is indeed a special day.  Every July 4th and 5th Carla Black and her husband Angel Rodriguez open up their beautiful private garden for anyone to come visit. They live near Volcan, on the far western side of Panama.  The garden is filled with beautiful heliconia flowers, magnificant views, water features, and hiking trails.  They have a plant sale during the two special days.   Carla is currently the President of the Heliconia Society International.

Heliconia?  You’ve seen them, even if you didn’t know what they were called.   Heliconias are the ultimate exotic flowers, starring in arrangements in tropical hotels around the globe and as far away as outer space – on television, anyway; heliconias greeted intergalactic ambassadors on Star Trek: The Next Generation. Closer to home, they can’t be beat for providing fantastic foliage and bright color in tropical and subtropical gardens

Astonishingly, all of the gorgeous forms of heliconia are made by nature. Humans have not been able to successfully hand-pollinate heliconia, so there are no artificial hybrids. Hummingbirds are the only pollinators observed by scientists, though many other creatures visit the flowers. Natural hybrids are rather common, thanks to incessant visits by those hummers.  And were sure do have a lot of hummingbirds in Panama!

Now that you know about the role of hummingbirds, which are found only in the New World, you’ll not be surprised to learn that the approximately 250 species of heliconias are native to the Americas (with the exception of six species in the South Pacific which are pollinated by bats).

In Panama, you see heliconias growing alongside the road and on hiking paths everywhere.

CLICK HERE to see the incredible views from Carla’s house and some of the plants she had for sale.  Here are more photos of heliconias at Carla and Angel’s 5 acre garden… On the drive over to Carla’s garden, my friends and I spotted this unusual horse statue

As we were leaving the garden, another visitor was entering with an 8 month old howler monkey she  had rescued. 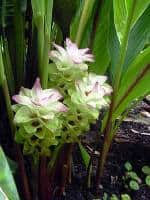 On July 4th, there were Independence Day celebrations all over Boquete.  Many restaurants had live music and BBQ specials.  Some had fireworks too.  By the way… fireworks are sold year round in Panama because there is always a good reason for a party.

So… even when you move to Panama… you can celebrate traditional USA holidays.